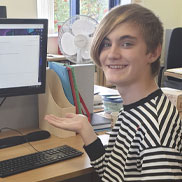 Whether it’s a lack of education from schools or the taboo around periods, the topic seems to be a total minefield for teenage boys. But regardless of gender, we believe that everyone should know about periods. One step towards tackling this and seeing periods as normalised is by openly talking about it.

At Natracare HQ, we were lucky enough to have an intern, George, for a week. We decided to find out – as a teenager- everything and anything he knew about periods! We tested his knowledge, and thankfully had the chance to help fill him in on some knowledge gaps.

George: Once a month when people bleed from down there, cry more and eat chocolate.

Let’s get the basics down first, shall we? Periods or menstruation is a part of the menstrual cycle. The menstrual cycle is a hormonal cycle that a person’s body goes through to prepare for pregnancy. A menstrual cycle typically lasts around 28 days and it begins on the first day of a person’s period. A period is when a person bleeds from their vagina as their body releases the lining of their uterus.

How long does a period last?

George: I would say it lasts about a week.

On average, periods last for around 2-7 days, but this can differ for each person. Young people can get their first period at any time from the age of 8, but it usually happens around 12-13, and they will usually continue to get their period every month until they reach menopause, which comes around the age of 50-55. This means that a person will have an average of 451 periods in their lifetime… yay 🙄.

Why is it called a period?

George: Because it’s a period of time?

The word period comes from the Latin word periodos meaning “cycle, circuit, period of time”, which we think is rather fitting.

George: I’ve heard they’re as bad as being kicked in the balls.

How long is a piece of string? It often feels like you would expect – like you are bleeding from your vagina. Every experience of a period varies for different people, from the symptoms that you might feel, to the flow of blood.

There are also different symptoms you might feel thanks to a period, like mood swings and stomach cramps, otherwise referred to as PMS.

Some people find the intensity of these symptoms to be debilitating, halting their productivity at work or school, while others may be able to drink a ginger tea and feel fine. It’s a process of getting to know how your periods work over time, figuring out which symptoms are normal, and how is best to manage them.

Why do people bleed on their period?

George: Because the egg rips some veins?

Thankfully, our veins are not being ripped by our eggs once a month. Actually, the reason why there is blood during periods is because the uterus lining breaks down and bleeds out of the body.

During the menstrual cycle, levels of the hormone oestrogen rise which causes ovulation – the releasing of an egg from the ovaries. The uterus lining then prepares to receive the egg by thickening. After the egg has been released, if the person does not become pregnant, the egg dissolves and hormone levels fall, causing the uterus lining to break down and leave the body as period blood.

Is it really just regular blood?

George: I think there’s also some other stuff in there, like discharge.

Menstrual blood may seem alien, maybe even gross (it’s not), to the likes of teenage boys, we understand that. But period blood is entirely harmless. Actually, only about 1 tablespoon worth of “regular” blood is lost in a typical period. Menstrual fluids are made up of the blood and tissue built up on the uterus lining over the course of a menstrual cycle. Period blood can vary in colour, from bright to dark red to brown, even to black – this is normal and is caused by blood reacting with oxygen.

How much blood is there?

On average, between 3 to 5 tablespoons of menstrual fluid is lost each period but, again, this can vary for everyone. The range of period products available match the changes in menstrual flow during a period, which can be much heavier at the beginning.

What’s so bad about ‘day one’?

George: The muscle contractions pushing all the blood out?

Day one is the WORST! Just kidding… kinda. The first day of a period is often when the flow is heaviest and the symptoms are at their most intense. Cramps, fatigue and the feeling of wanting to nest peak. But like most of the answers here, this isn’t necessarily true for everyone.

Why do people get grumpy on their period?

George: Because they’re annoyed that their husbands don’t have periods.

There’s that, and the pain, the blood and the hormones. Seriously though, the flux in our hormone levels can make us more sensitive or argumentative. There’s a drop in oestrogen and progesterone which causes pre-menstrual symptoms like sadness, irritability and anger. Along with the painful symptoms this can cause us to lose our rag a little! Hormonal changes during the menstrual cycle also help us feel on top form during other times, so it does generally balance out as the best and the worst of us.

Do people’s periods sync up when they spend time together, and how?

George: By connecting their Bluetooth?

Somebody’s been watching too much Black Mirror. You may have heard this one through the grapevine. The short answer to this age-old question is “we don’t know”. There have been studies that have found evidence supporting both for and against it, and so the results remain inconclusive for now. But when we find out, we’ll be sure to let you know! In the meantime, at least you know you weren’t alone in thinking we had bluetooth vaginas:

Can people go swimming on their period?

George: Surely the blood will attract sharks if they’re in the sea.

We absolutely can go swimming on our period! In fact, while we’re on our periods we can do anything we would normally do when we aren’t menstruating, swimming is just the start. We might not necessarily feel like swimming if we’re doubled over in pain from stomach cramps, but other than our own willingness, there is nothing stopping us (not even sharks) from perfecting a swan dive or two.

How long do tampons last in the vagina?

George: I would say about a day and a bit. Depending on whether you pee or not.

Tampons are inserted into our vaginas to soak up blood and they should be changed every 4 to 8 hours. They can actually be kept in when we pee, that comes from a different hole! Tampons can come with or without an applicator, which is often made from single-use plastic but can also be made from cardboard or be reusable. Like pads, some tampons are not biodegradable as they contain synthetic fibres and plastics such as rayon. But it is possible to find compostable and biodegradable tampons, too.

What’s the difference between pads and panty liners?

Exactly! The biggest difference between pads and panty liners is that pads are thicker and more absorbent. Both of them can be useful for different reasons, depending on how heavy our flow is, where we are in our cycle and what we prefer.

What actually is a menstrual cup?

George: A cup that collects blood, like a gauntlet you find in haunted houses.

Close enough! Menstrual cups are a reusable period product option. It is very much what it sounds like; a, usually silicone, cup that is inserted into the vagina to collect menstrual blood, then taken out, emptied, cleaned and re-inserted. Menstrual cups should be emptied and rinsed at least every 12 hours.

Why would someone choose tampons over pads and vice versa?

George: Because tampons are more discreet?

There are a variety of different period products available for people to use, but what it all comes down to when choosing is personal preference. A lot of people will try a variety of period products throughout their lives to find the one that makes them feel the most comfortable and confident.

What is a perimenopause?

George: When you stop having periods because of eating too much spicy food.

Oh, George, if only it were as easy as eating a madras to get rid of our periods for good. Perimenopause is when symptoms of menopause have started before your period has stopped. This can go on for months or years and symptoms can include hot flushes, difficulty sleeping and vaginal dryness.

If your period is at the end of a month, say the 29th, would it carry on to the next month?

George: Maybe? I mean the thing that makes the menstruating happen doesn’t have a calendar. I think.

Regardless of the date in the calendar, a menstrual cycle usually lasts around 28 days, so yes, it will carry over to the next month if it falls on the 29th.

So, there you have it! Do you have any more period-related questions? Leave yours in the comments below.