By Susie Hewson – Founder of Natracare>

I have been a revolutionary warrior since 1989. Outraged by the lack of concern and growing evidence about the risks of synthetics and toxic residuals on women’s health. I started my global campaign, as with all good BLOODY revolutions, because I got ANGRY. I started to raise awareness about these undisclosed issues. The tampon industry thought the issue unimportant and invisible to women. I spoke out about dioxin residuals in tampons which were all produced using chlorine bleached, synthetic viscose rayon. Occasionally a tampon is made mixed up with a few percent of GMO, pesticide sprayed, conventionally-grown cotton.

I used my voice to make women think seriously about what they were buying and using in for their vaginas every month. I wanted to educate them on the risks of using tampons made from viscose/rayon. Especially about dioxin, organochlorines, fragrances, lubricants, plastics and azo dyes – all this compared to Natracare’s organic 100% cotton tampons.

Have an organic period

We only ever use 100% certified organic cotton across our entire products range, including our period products!

In the years before the internet, shared campaigning groups helped amplify the message through word of mouth. Organisation such as the Women’s Environmental Network and Greenpeace understood the cause. By the mid 1990’s Natracare was spreading the word on the web, communicating our campaigning message to those who could receive it and whoever was willing to pass it on!

Natracare tampons were included in ground-breaking research, conducted by Dr Tierno of New York University Medical School. The study looked at the impact on TSS of different fibre types used to make tampons. Natracare was the only 100% cotton tampon produced anywhere in the world at the time. It became the only 100% cotton tampon included in the peer-reviewed study, amongst well known brands.

The published research shows Natracare as the safest option to reduce the risk for TSS – the rest is history.

Corporate lawyers representing the major brands of tampons (and their industry body) made up their own campaign to discredit the findings. They tried to assault my integrity and discredit the Natracare brand by a bombardment of harassment and damage limitation press releases. They were intent on shutting me up and closing me down. However they couldn’t stop me as a revolutionary pioneer who was very angry at the industry, and concerned for my Sisters using their products. My outspoken truths about carcinogenic dioxin in tampons and their future impact on women’s health and our environment continue to this day – relentlessly. 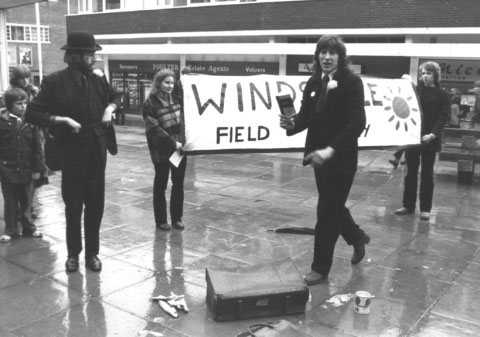 Susie Hewson, campaigning with Greenpeace in the 80s
I was soon not to be alone in this quest. After the research published in July 1994 by Philip Tierno and Bruce Hana (Propensity of Tampons and Barrier Contraceptives to Amplify Staphylococcus Aureus Toxic Shock Syndrome Toxin 1), I was contacted by Karen Houppert of the Village Voice for an article published Feb 7th, 1995 called “Pulling the Plug on the Sanitary Protection Industry”. It headlined on the front cover as “Embarrassed to Death, the hidden dangers of the Tampon Industry”. The article exposed that in the USA, there was no reliable government oversight. There was a failure to regulate organochlorines in tampon production. Organochlorines refers to chlorine bleaching or whitening of materials. This releases chemicals like dioxin, from the same chemical family which includes Agent Orange!

Even way back in 1994, we were calling for ingredients to be listed on menstrual product packaging. Just as shampoo ingredients are required to be declared. Today there still is not, a comparable rule for tampons or pads to list what they are made from! This is despite the fact that they are held for hours in one of the most porous and absorbent parts of the body.

In a hopeful attempt to address the US “government oversight”, Carolyn B Maloney introduced the “Tampon Safety and Research Act of 1997” on November 11th 1997. She referred to the 1994 EPA report on dioxin as a known animal cancer-causing agent as well as a probable carcinogen in humans. In 1996, an EPA study also linked dioxin exposure with increased risk for endometriosis, suppression of the immune system, increased risk for pelvic inflammatory disease, reduced fertility and possible interference with foetal and childhood development. The FDA concluded “the most effective risk management strategy would be to assure that tampons, and menstrual pads for good measure, contain no dioxin”. In Rep Maloney’s press release 105th/1997-11-11 Tampon Act, she goes on to reference Tierno’s research having shown that synthetic fibre additives in tampons amplify toxins associated with TSS.

In 1992, the late Rep Ted Weiss of New York brought up the issues later reference by Rep Maloney, in a subcommittee hearing of the Committee on Government Operations. His staff had uncovered internal FDA documents suggesting the agency had not adequately investigated the danger of dioxin in tampons. Congresswoman Maloney’s bill intended to direct the National Institute of Health to conduct independent research rather than depend on biased research funded by tampon manufacturers. What was the true impact of these materials, residuals on a menstruating persons health?

The industry went on the attack and did what it always did. Damage limitation and biased press releases sent to major women’s publications. Congress woman Maloney reproached for not reporting the actual facts of the risks and lazy journalism.

On June 1st 2000, Natracare received an update from Rep Maloney along with a copy of her letter sent to the Commissioner of the FDA, Dr Jane Henney, on May 17th 2000. It expressed her concerns about the EPA reports (carried on the front page of the Washington Post) definitely linking dioxin to cancer. Dioxin was identified as risk ten times higher than previous projections and confirmed as a human carcinogens with a lifetime cumulative danger to health. Carolyn Maloney asked the National Institute of Health to request research on tampon safety in the “Tampon Safety and Research Act 1999”. Rep Maloney also introduced The Robin Danielson Act (H.R. 889) forcing the Centre for Disease Control (CDC) to establish a system for collecting data on the number of TSS cases.

Seventeen years later! On May 5th 2017, Rep Carolyn Maloney has finally got her Act referred to the Subcommittee on Health. A program of research on the risks posed by the presence of dioxin, synthetic fibres, chemical fragrances, and other components of menstrual management products has been established.

I have spent 30 years speaking out about the impact of Dioxin, synthetics, dyes, fragrances and lubricants used in period products. The impact on the health of women and our environment. Rep Carolyn Maloney has spent almost 20 years trying to correct a “government oversight” and here we are. Natracare started the revolution, carried out three decades of campaigning and educating women over the noise of irresponsible marketing and denial statements of the corporate brands. The disrupter, that is Natracare, stood true and fast to the cause. Natracare stands defiant against an institutional disregard for, what to me back in 1989, was blindingly obvious.

Read more about our story!

Can You Sleep With a Tampon In?

How to Talk to Doctors About Your Period