What do you call a period that’s crossed with a culture built upon misogyny with a lack of sex education in schools? Any of the 5,000+ period euphemisms that exist around the world, of course!

That’s right, an international study by our friends at Clue found there’s more than 5,000 slang words used instead of ‘period’ across 190 countries worldwide. That’s over 5,000 instances somebody has wanted to say something about their period, but not felt comfortable using the actual word out loud. The whole shape of language has evolved to either make a joke out of periods or to hide it because people feel ashamed, in 5,000 different instances across the globe.

Sure, a lot of the period euphemisms out there are quite funny (as much as we hate to admit it!), and our favourites include:

But why do period euphemisms even exist? Why does it make us feel more at ease to say we have painters or tomato juice in our vaginas once a month, than it does to simply say we have our period? Let’s explore:

You might have already noticed that there’s a stigma surrounding periods that exists in most cultures around the world. Many people with periods are taught from a young age that their period is dirty, and something to keep to themselves. Plus, they learn that it’s something to be avoided at all costs. This societal discomfort with periods has led to (especially younger) people feeling as though their period is something to be ashamed of – forcing them to keep quiet on the topic for fear of making other people uncomfortable. This of course should not be the case!

This stigma manifests in a variety of ways. It could be as small as hiding your tampon up your sleeve before going to the bathroom, or as big as putting your education or career to a grinding halt each month. Period euphemisms are yet another manifestation of the shame associated with our periods – like Voldemort, periods shall not be named!

Did you know that almost three quarters of children are dissatisfied with the education they receive on periods? The majority of young people aren’t getting the education they want and deserve about their bodies or their peers’. This can lead to shyness, misunderstanding and embarrassment around the topic. Think about it this way, if you’ve not had an education in Jeremy Bentham’s Panopticon system of control (the idea that a prisoner being watched but unable to know when or by whom will police themselves through fear of punishment… in case you wondered!), you’re unlikely to talk about it confidently, or probably at all.

The same goes for periods. Fear of the unknown makes people feel uncomfortable talking about it, often to such an extent that they can’t even bear to call it by its name! Enter period euphemisms, the perfect way to disguise your (perfectly normal) interest in periods.

As social creatures, we like to adhere to social norms and fit in with the people around us. So, when your family, friends, teachers and colleagues all use period euphemisms, it perpetuates the idea that the word “period” is rude or disgusting, as are periods themselves – and you follow suit.

Is it ok to use period euphemisms?

So, should you give your own period these sometimes funny, sometimes a little weird nicknames? That’s up to you, and what you feel most comfortable with. We think it’s a good thing to call a period a period, for clarity in communication and because it helps to stop the harboring of shame around your body’s natural cycle. But if you have a positive nickname for your period that makes it easier to talk and think about, who are we to stop you? Just please, nickname responsibly – we don’t recommend calling your period “Satan’s sacrificial waterfall” or “the massacre of the unborn” for obvious reasons.

Say it loud and say it proud!

We have a challenge for you. Next time you’re on your period, tell someone. Say the words “I’m on my period” or “I got my period today” and see how they respond.

Our guess is nothing will change – other than deciding not to make fun of your own body to put other people at ease, and possibly gaining a little more pride in your period! Instead of hiding your period behind jokes and nicknames, you’ll be being honest and open about how your body works, helping to smash that stigma and take control of the discourse around periods and your body. You might even inspire someone else to be more open about their own period!

Improving period education isn’t just good for reducing shame and stigma, it’s also great for the environment! Read more about the why we should teach boys and men about periods! 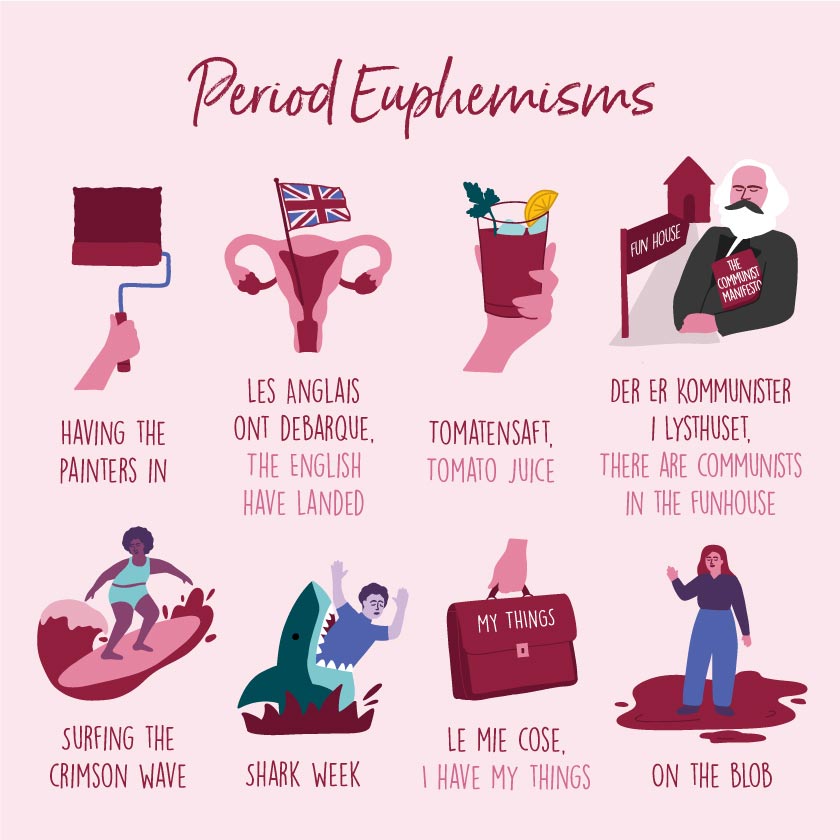 Can You Sleep With a Tampon In?

How to Talk to Doctors About Your Period