Can you imagine a billion elephants made of plastic? Or 25,000 Empire State Buildings made of plastic? According to research by US scientists, that is the equivalent to the weight of the all plastic that has ever been produced. Since humans first started making plastic only 65 years ago, a colossal 8.3 billion tons of plastic matter has been created.

Plastic is a completely man-made substance, which is deliberately produced by heating and processing finite crude oil and adding other chemicals to it. You’re using it now – it’s part of your phone, your computer, there’s probably some in your chair and it’s very likely that you’re also wearing some!

Plastics are very useful and durable materials but are also extremely damaging to our environment, because of the very property that makes them so useful: their stubbornness. Plastics will not dissolve, decay or wear away and this makes them very damaging to the living world at the same time as being useful to us in the short-term.

Plastics do not biodegrade – break down into biologically useable compounds – for living things to re-use. In fact, scientists have found that when plastic decomposes, it releases potentially toxic bisphenol A (BPA) and PS oligomer into the water. Plastics usually do not break down in an animal’s body after being eaten. However, the substances released from decomposing plastic are absorbed and could have damaging effects. Herein lies one of the major problems: single-use disposable plastic.

Increasingly, plastics are making their way into the rivers and oceans of the world, where it causes havoc. Plastic bags, nets and six pack rings strangle and choke sea creatures. Smaller pieces are mistaken for food and eaten by birds, turtles, fish and mammals, poisoning them, causing internal bleeding, or blocking the digestive system, often killing them.

In the North of the Pacific Ocean, there is an island of floating rubbish twice the size of Texas and weighing about 3.5 million tons. 80% of it is plastic. Hardly anyone mentions it because it’s out of sight, but it’s about time we started taking notice! That’s only the floating plastic, too. Greenpeace reports that 70% of the plastic that makes it to the ocean sinks to the bottom, and that Dutch scientists have found 600 000 tons in the North Sea alone. The bits that are too small to see do just as much damage – they have been shown to suck up and store hazardous chemicals in the sea, turning into concentrated sponges for toxins. Then when they’re mistaken for food by fish, they start working their way up the food chain to us. 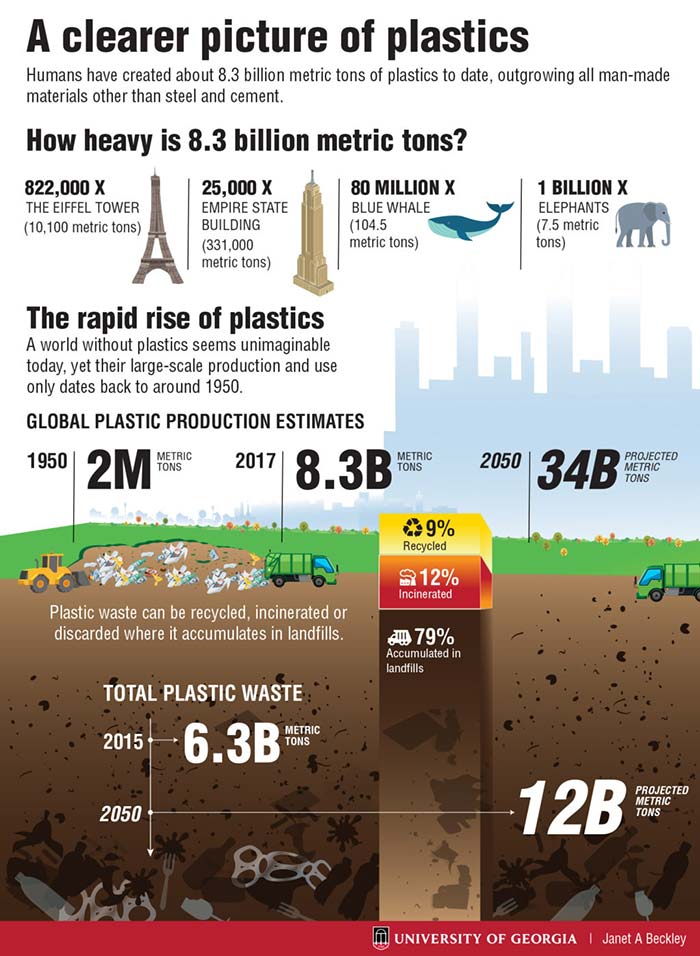 So what can we do? Well, get used to the idea that plastic is harmful, nasty and toxic. As with most things, we advise you to follow the four R’s: Reduce, Refuse, Recycle, Reuse.

Look for alternatives to plastic wherever possible, like cotton bags rather than plastic carriers, metal water bottles etc. If you do end up with plastic bottles or boxes, reuse them to hold rice or pasta, and reuse the water bottle. Recycle all the plastic you can. Ask your local authorities about what provisions they make for plastic recycling and encourage them to provide more.

Here at Natracare, we have another R – Raise your voice! Show your friends photos of plastic clogging the oceans and choking sea birds. Pester the shops you use regularly to replace plastic packaging with cardboard and bioplastic, a very exciting innovation where biodegradable plastic like material is made from plant starch, complain about plastic bags at your supermarket. Generally make a nuisance of yourself until people start listening – if enough of us show we care, eventually change will happen. You can also support organisations doing good like 5 Gyres, City to Sea and the Marine Conservation Society – who all make great change happen. Keep periods plastic free.