When you’re trying to be more sustainable, one of the first tips you’ll often come across is to shop locally and independently, like at your favourite zero waste shops. There is valid reason for this – the prevalence of industrial-scale farming and distribution contributes to the climate crisis we currently face. Such farming causes the reduction of biodiversity, manipulation and destruction of healthy soil. It also adds to the pollution of waterways (and oceans!) with chemicals like pesticides.

Small-scale farming makes up 70% of the world’s food. Independent farmers across the globe are challenging the sustainability of industrial-scale farming by proving that we can achieve cleaner crops that are better for our bodies and the planet.

At Natracare, we think it’s important to celebrate the farmers who work to put more sustainable farming on the map and better food on our plates. That’s why we jumped at the chance to get involved with the Gaia Foundation’s We Feed the World project.

What is the We Feed the World project?

Run by The Gaia Foundation in collaboration with journalist Francesca Price, the We Feed the World project was designed to shine a light on local farmers in their everyday lives and working environments. With the help of 47 renowned photographers, photographs of 52 farming and fisher-people communities from around the world were exhibited at a show in an industrial warehouse, the Bargehouse in London.

To further the celebration of farmers who took part, packs of the photographs showcased at the exhibition were printed and sent to every farmer and their community, as well as grassroots movements around the world like Via Campesina.

Communities around the world held their own exhibitions

With so many communities and movements becoming enamoured with this project and the farmers it celebrates, the photographs spread even further. The community of San Isidro teamed up with a local NGO, Collective for Autonomy, to take the collection on a tour of Mexican communities and events.

What’s more, communities that participated in the We Feed the World project loved their packs of the photographs so much that they held their own exhibitions closer to home. These local exhibitions allowed each community to come together and celebrate their work and the work of farmers with similar values to them from all over the world, because what’s better than celebrating with those who are closest to you?

Photographs from the We Feed the World Project

The We Feed the World project was a project we are proud to have contributed towards at Natracare. We feel strongly that our words on the project will never be as powerful as the images and stories behind them. That’s why we’ve put together a gallery of our favourite photographs – ones that were exhibited and others taken at the local exhibitions held, we hope you enjoy them as much as we do: 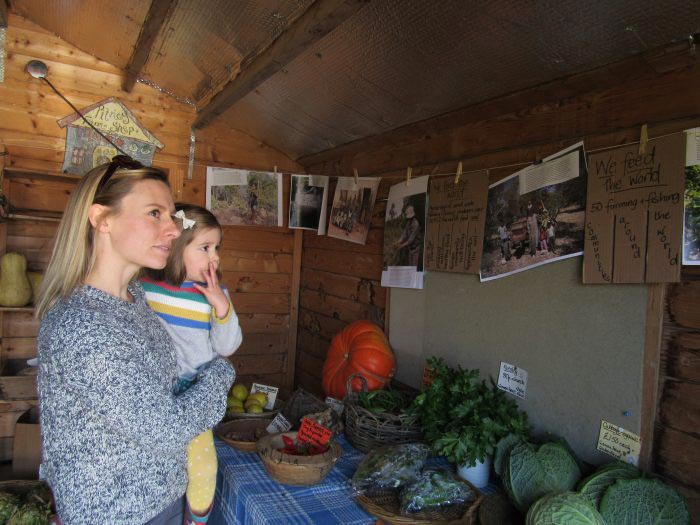 For visitors to their “Veg Shack”, shop and café, Lizzie and Rob Walrond at Glebe Farm exhibited the photos from the project. 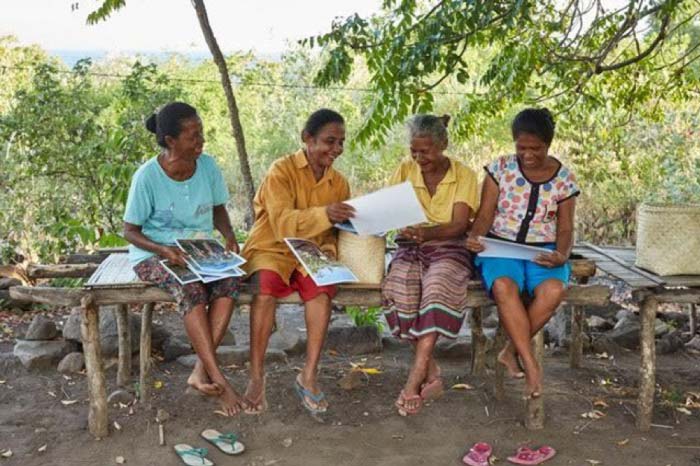 The women of the Likotuden community in East Flores Island, Indonesia organised a celebration for World Food Day. Their photographer for the We Feed the World project also visited the community to show them the photographs from the exhibition. 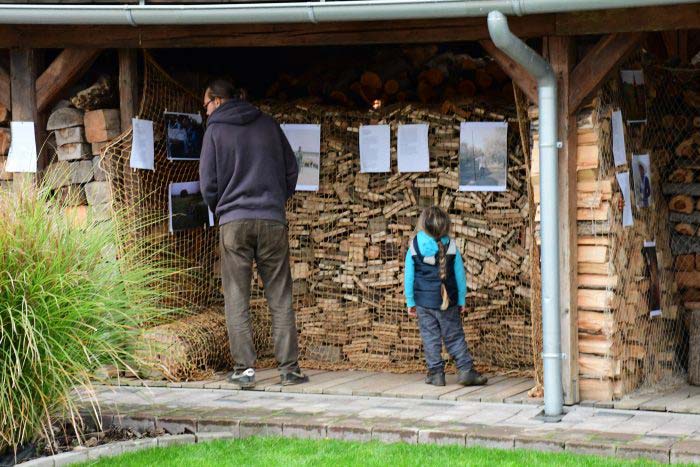 Zuzana, a farmer from Dlha And Vahom in Slovakia came to London to see the opening of the exhibition and participate in talks. She then exhibited the prints in her neighbour’s courtyard with a homegrown feast for the 50 people who came! 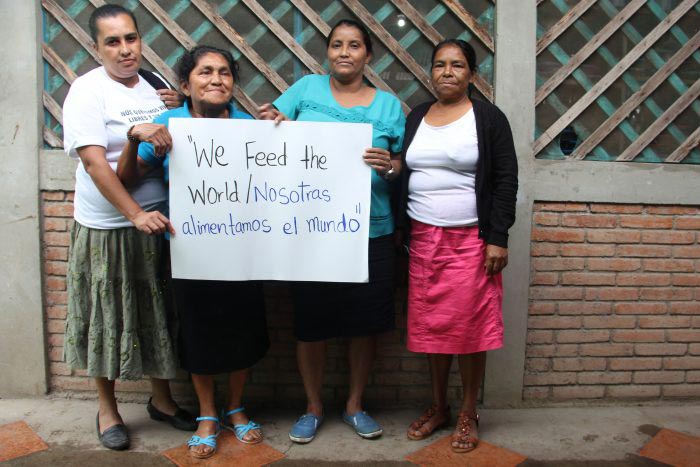 The Foundation Between Women (FEM) in Esteli, Nicaragua celebrated their 24th anniversary on the 31st October with 200 members from the region in attendance. They celebrated with their own food and Hibiscus wine and exhibited the photos from the We Feed the World project.

Read more about the community-led projects.

Photographs from the exhibition 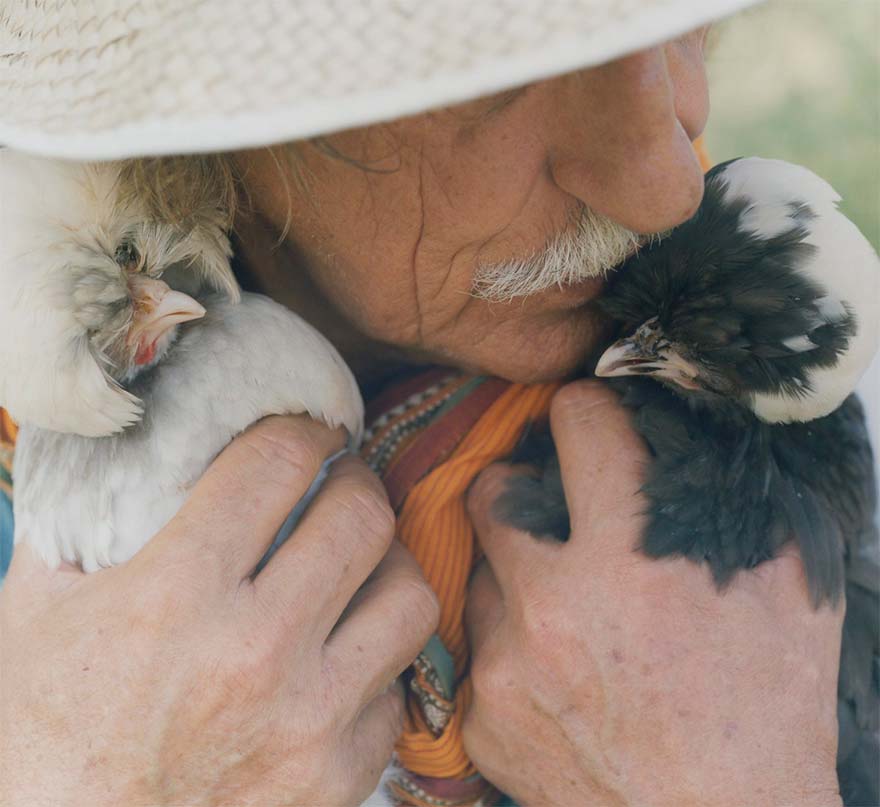 When Guillermo Ferrer returned to the farm on which he was born, after leaving for years, the haven of agriculture and life he knew and loved was now barren – an unrecognisable desert. Guillermo set out to restore the land and, 35 years on, 250 local families visit the farm daily to collect local produce from Guillermo’s ‘oasis of life’, with over 300 fruit trees and 40 beehives. 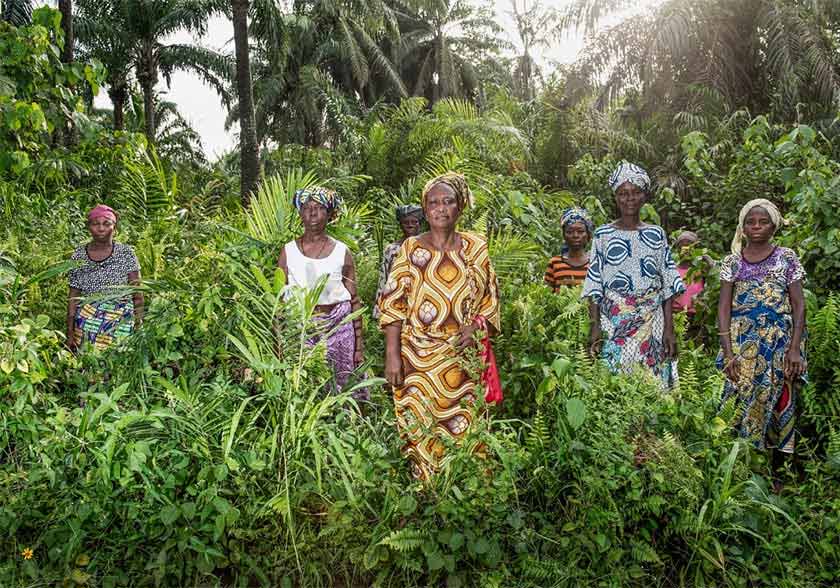 Houenoussou is the women’s cooperative in Todedji. Every morning, members eat together before setting out to their two-hectare market garden, where they work to provide organic vegetables for their community throughout the year and maintain traditional knowledge and ancestral seed varieties that will be passed down to their daughters. 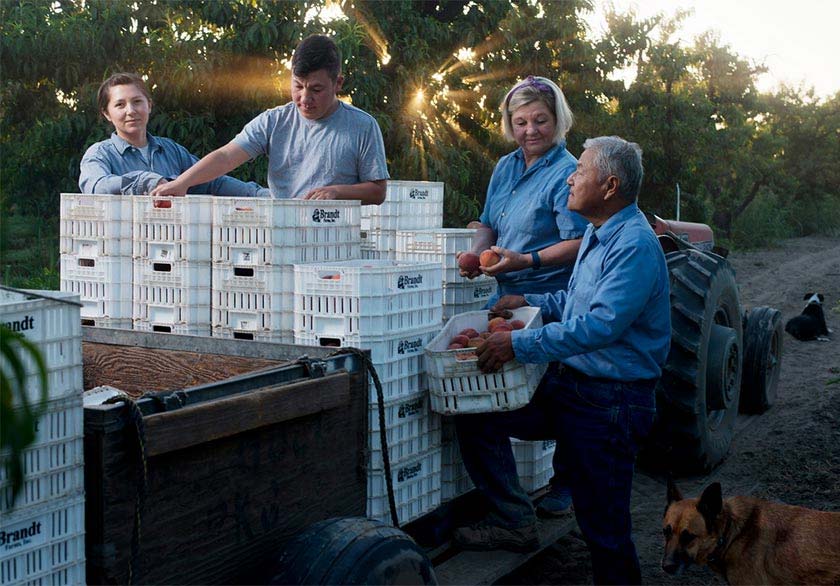 This peach farm in California is home to the Masumoto family, and it’s also where they make their living. While the peaches they grow are some of the juiciest in the area, they’re ‘too small’ according to the standards of supermarkets. Instead of compromising their small but mighty peaches, the Masumoto family sell directly to restaurants and at farmers markets across the state, because they know that quality always comes before quantity. 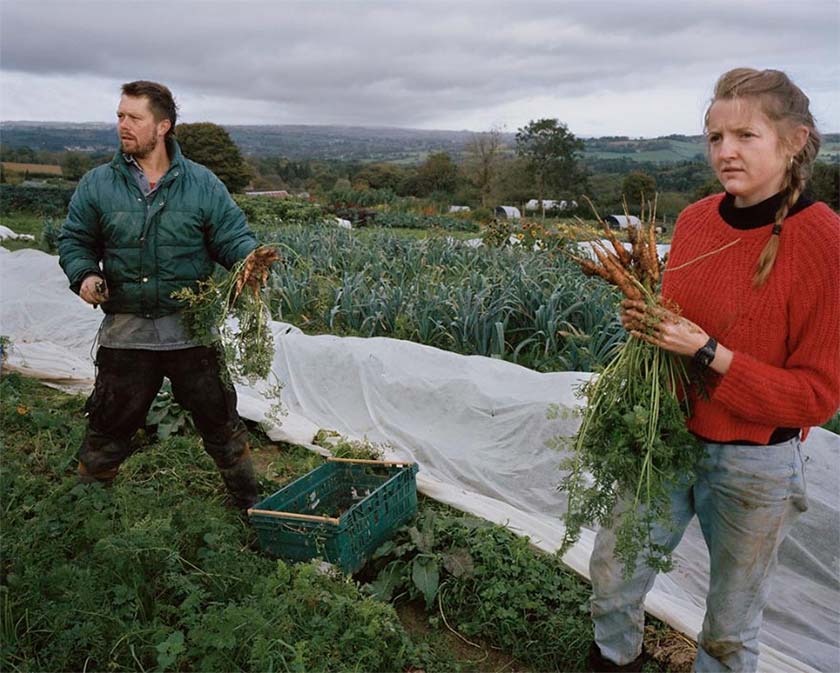 Setting out on a mission to nurture the earth and produce nutritious and affordable food for the local community, Dee Butterly and Adam Payne are young, new entrant farmers trying to address the loss of biodiversity in farming and make their food accessible to all. 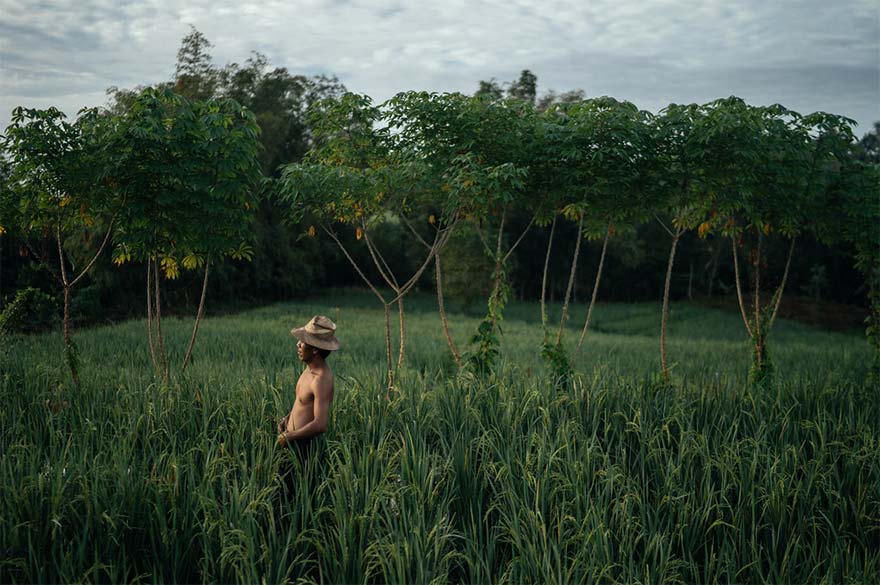 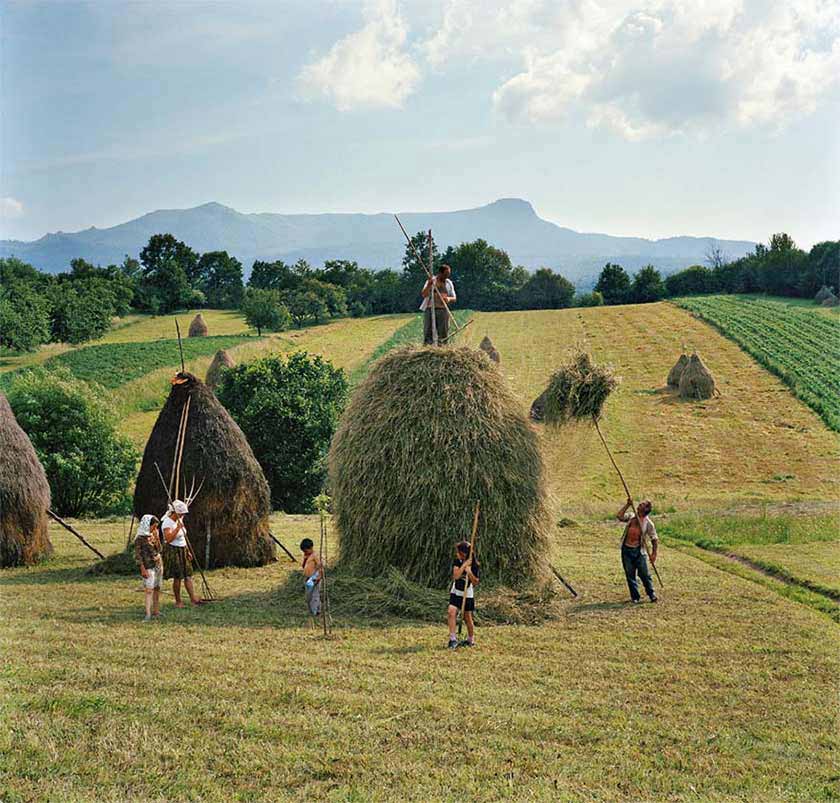 These haystacks are made from Alfalfa and local grasses by the Borca family in Romania. They’re a centuries-old tradition, made with the purpose of feeding their animals during the winter months. Traditions like this are currently under threat in Romania, as farmland is being sold off to foreign companies with no consultation or compensation – leaving the farmers helpless in protecting their diverse ecosystems against the companies buying up their land. 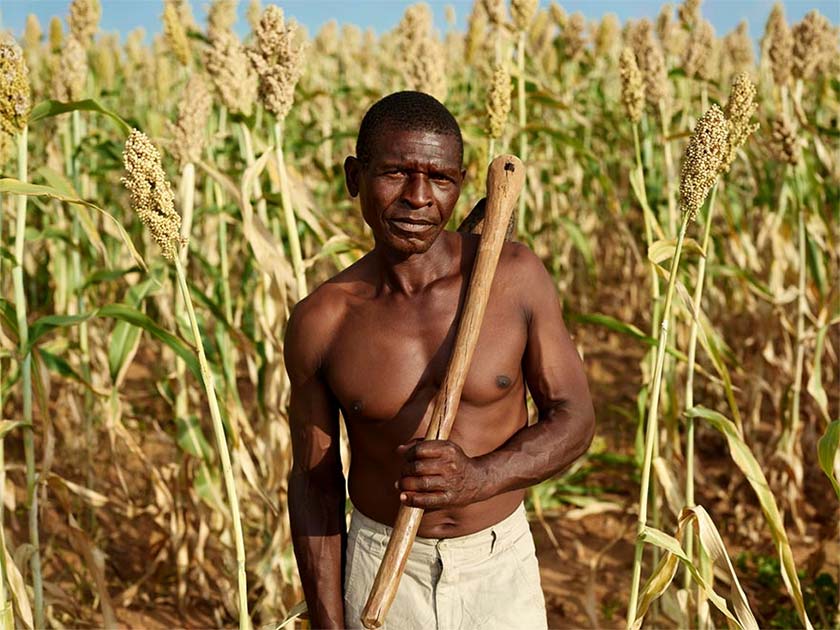 Erratic rainfall has been an effect of climate change in south central Zimbabwe. Unpredictable and limited rain has left the Mazvihwa community struggling more every year to grow their crops. To combat this, the people of the community are reviving more traditional crops that were cultivated by their ancestors to last through long dry periods. Famers have seen a great increase in yields as a result of going back to their roots to regenerate the land.

You can see all the photographs from the exhibition and read more stories of the farmers.

Find out more about the organisations we work with through our 1% for the Planet membership.